Key developments from the crucial AIADMK general council meeting that will decide who is mightier in the party, Edappadi Palaniswami or O. Panneerselvam, or both.

Key developments from the crucial AIADMK general council meeting that will decide who is mightier in the party, Edappadi Palaniswami or O. Panneerselvam, or both.

The meeting also assumes significance amid a sense of unease between the AIADMK and the BJP, whose leaders have been making observations indirectly affecting each other’s political interests.

Here are the updates:

AIADMK Coordinator O. Panneerselvam and aides walk out of the party’s General Council meeting in Chennai after it stuck to the single leadership demand and favoured his rival and party Joint Coordinator Edappadi K. Palaniswami (EPS).

As EPS was honoured with a decorated crown, a sword and sceptre by supporters amid chants favouring him, OPS along with his supporters including Deputy Secretary R. Vaithilingam moved out of the hall and left the premises. The GC meet, that witnessed chaotic scenes was over within 40 minutes after it started. It is likely to be adopted.

Mr. Hussain recalls that as a driver of a Government bus, he had stopped it midway and headed to meet MGR after his expulsion from the DMK. Mr. Hussain was among the 11 signatories who favoured MGR launching a new party. 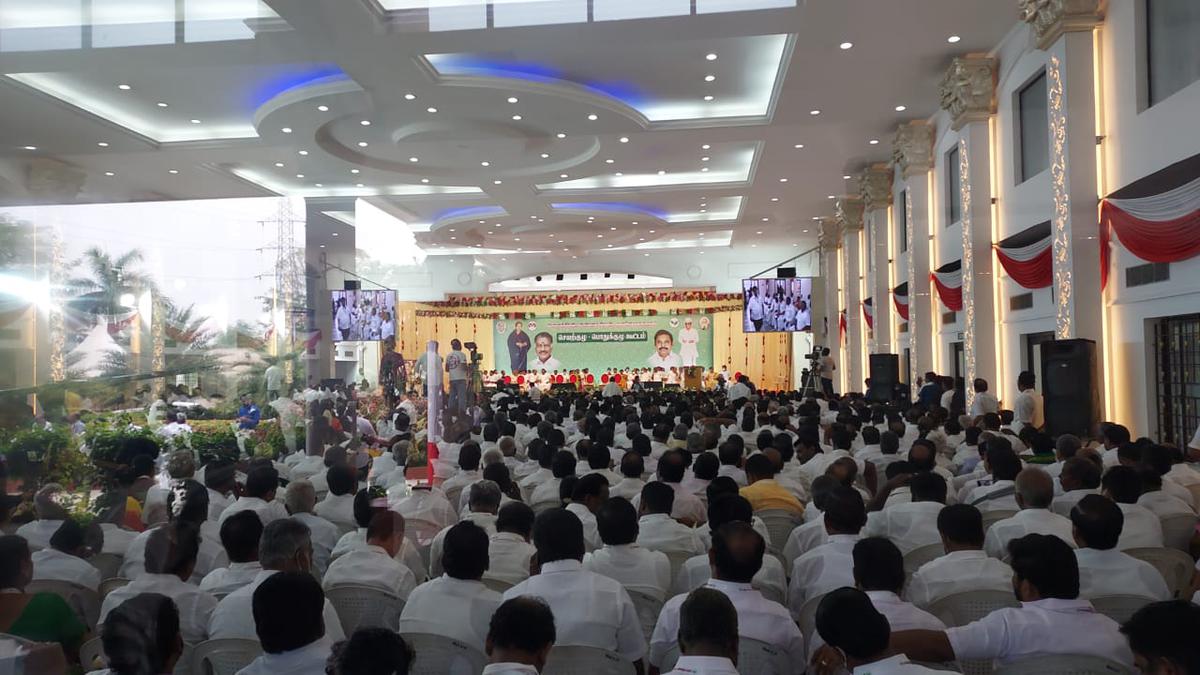 A section of general council members seated at the meeting
| Photo Credit: B. Aravind Kumar

K P Munusamy declares that all 23 resolutions have been rejected by the AIADMK general council members. “The members want only unitary leadership,” he declares.

He says all resolutions will be passed only when the party reintroduces them along with a resolution for unitary leadership. – B Aravind Kumar

C.V. Shanmugam screams saying the AIADMK general council is rejecting all 23 resolutions being brought in at the meeting.

B Valarmathi in her welcome address recalls MGR’s famous song “Ennadhan nadakum nadakutume…” (Whatever happens shall happen) and goes on to say there is one leader and he will raise.

EPS arrives at the venue 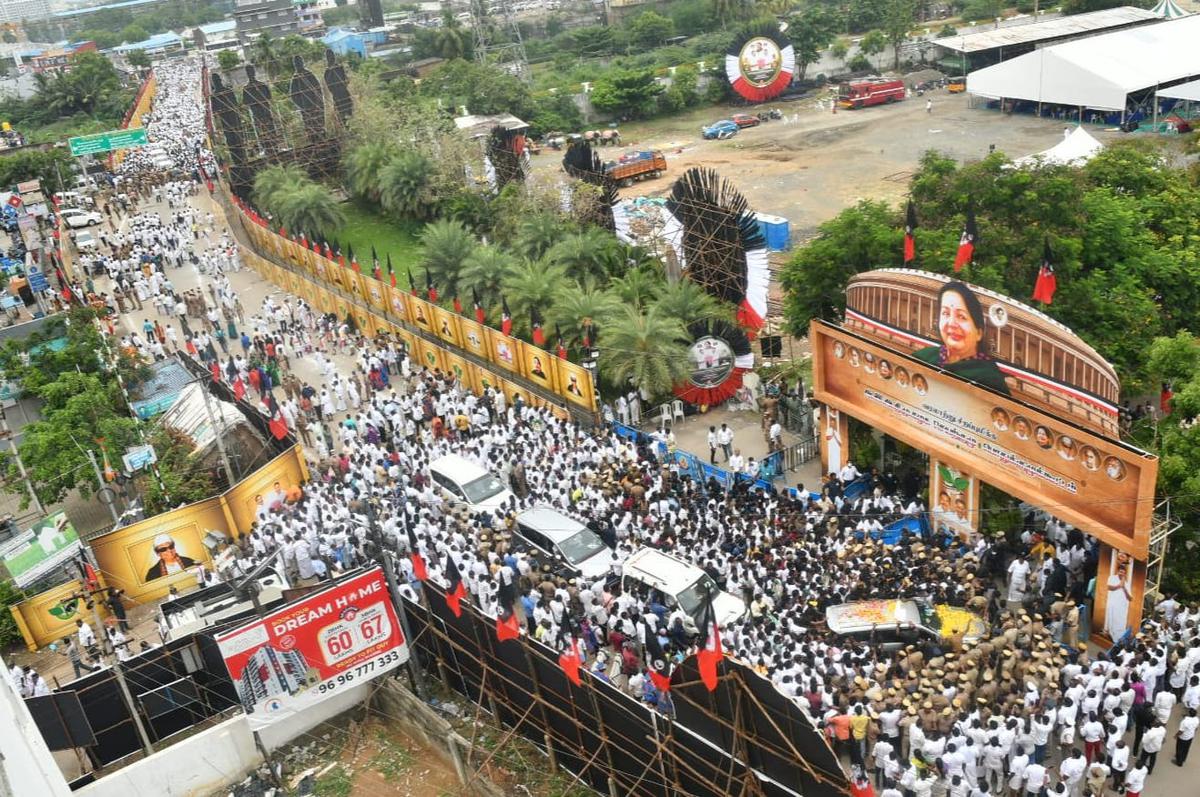 Edappadi K. Palaniswami arrives at the venue amidst cheering and whistling.

He greets the members and takes his seat.

OPS arrives at the venue O Panneerselvam arrives at venue of AIADMK general council meeting after getting a HC verdict against amending bylaws of the party. Two days ago he had written to Avadi Police Commisioner not to permit the conduct of the same meeting.

A section of members shouted slogans against him: “ varathe varathe (don’t come )“

However, slogans are being raised in support of unitary leadership, a demand which Mr. Panneerselvam does not endorse.

The camp led by the party’s co-coordinator, Edappadi K. Palaniswami, appears to be well ahead of the group headed by party’s coordinator O. Panneerselvam, in terms of support from the members of the general council and the party functionaries.

While the Palaniswami faction wants the present system of dual leadership to be changed to single leadership, the other is against any change. Members of the former claim that their camp has the support of about 2,500 members of the council, the strength of which is around 2,700.

On Wednesday, former MP V. Maitreyan, who was with the Panneerselvam camp until recently, met Mr. Palaniswami and expressed his support for making the co-coordinator the party’s chief.

Party cadre dressed up as AIADMK’s former leaders M.G. Ramachandran and J. Jayalalithaa are at the venue of the general council meet
| Photo Credit: Vedhan M

Traditional music using percussion instruments like thavil and chenda melam were played to welcome the party leaders. Enthusiastic cadres carried balloons in the colours of the party flag and they were later released in the air.

Watch | AIADMK cadres at Vanagaram ahead of the party’s general council and executive committee meeting. Video: Velankamni Raj B pic.twitter.com/czkJrlJVyq

A Division Bench of the Madras High Court early on Thursday restrained the All India Anna Dravida Munnetra Kazhagam’s general council from passing any resolution aimed at amending its bylaws so that the amendments could pave way for unitary leadership instead of dual leadership in vogue now.

Justices M. Duraiswamy and Sunder Mohan passed the interim order after hearing an urgent appeal at the senior judge’s residence between 2. 40 and 4.30 a.m. The appeal was preferred against a single judge’s refusal to pass any kind of restraint order with respect to the resolutions to be passed by the general council, which is scheduled to meet on Thursday. – Mohamed Imranullah S.